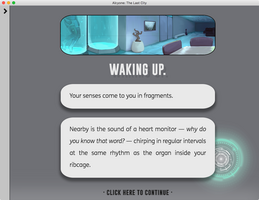 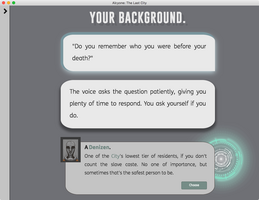 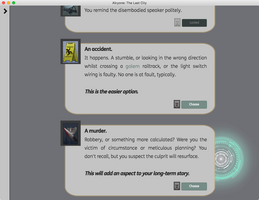 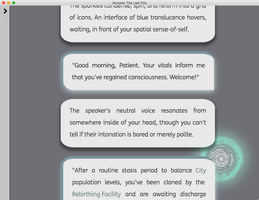 I'm extremely pleased to announce the initial release in the Alcyone: The Last City alpha — Alpha1!

Thank you all for being so patient as I've gotten this organised. This first release is a substantial change over the demo file I presented during Kickstarter; there's not any component of the game that hasn't been redone in some capacity. This portion of the game contains the same "areas" as in the original demo — character creation, a choice of two internship pathways with exposure to the Encounter system, and a secondary Encounter following completion of the internships. However, all of this has been rewritten and should look new even to players who saw the original demo.

Please leave comments/issues/questions in the thread I've created for the alpha here:

If anything comes up please don't hesitate to let me know — enjoy!

Get Alcyone: The Last City

A sci-fi interactive fiction game set in the last City in the universe.